Knee replacement surgery is increasing exponentially, much more than other joint operations. 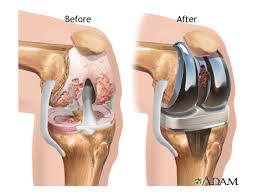 The most common age for women to have this operation is in their mid- 60s and it is similar for men but age can range from the 30s to the early 90s, Mr Edwards (Orthopaedic surgeon) states, and carrying extra weight can be a big cause.  Carrying extra weight gives a higher incidence of developing osteoarthritis.   However, genetic influences and trauma can also be reasons why people need knee replacement operations.  Knee replacement surgery is slightly more prevalent in women, he says.  That’s because there is a slightly higher predisposition in women to what we call primary arthritis, but it affects both males and females.

With knee replacement operation there is post – operative physiotherapy involved and usually it is quite painful, but there are few restrictions.  The success rate with knee replacements is approximately 85-90%.  A lot is down to the patient, you have to put the work into the rehab. 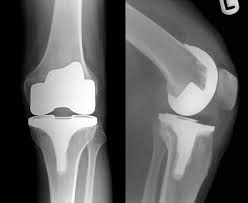 – concentrating on range of movement exercises at the knee to restore the knee function.

– strengthening exercises for the muscles around the knee joint, especially the quads muscle.

– progressing to using a single crutch for two to four weeks.

– driving is not allowed for six weeks.

– farmers are allowed to ‘tip around’ on the farm eight weeks after the operation.

– tractor driving may be possible after eight to ten weeks.

– full farming duties may be resumed after twelve weeks.

If you have knee pain, pop into us at Motion Physio Clinic, Prosperous, Tel: 045 841010.  I can perform an assessment, give you a diagnosis and treat you as required.

References from Country Living Magazine, May 2015,  What to expect from a knee replacement.

This entry was posted in Knee, Osteoarthritis. Bookmark the permalink.

One Response to Knee Replacement Surgery