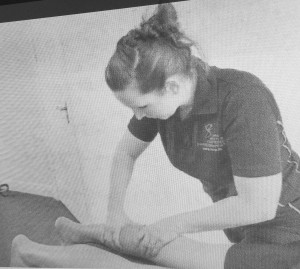 In 2005 she moved to London to work in the outpatients clinic at the Hammersmith NHS hospital.  During Avril’s time in London she completed a Masters in Musculoskeletal Physiotherapy in University College London, being awarded the highest clinical results in her year.  She also worked in private clinics in Clapham, Kensington and Twickenham.  Avril worked with the Fulham Irish GAA football team, who compete in the County London League, during her time in London.

Avril returned to Ireland in 2008 and took up a position managing Physio Dynamics clinic in Dundrum, Dublin.  During this time she worked with the Lansdowne Rugby club, being part of the backroom team that brought the club back up to Level 1 division rugby.  Lansdowne RFC went on to win the Division 1A league in 2013.

In 2010 Avril established East Coast Physio Clinic in Ashford, Wicklow with a colleague.  During her time at East Coast Physio, the clinic expanded to employ staff members and became part of the local community.  She had a regular slot on the East Coast FM morning radio show with Declan Meehan, giving advice to the public over the airwaves.

Avril also worked with the Irish Ladies Hockey team, (2011 – 2012), supporting them in their campaign towards the London 2012 Olympics.

This entry was posted in Meet The Team, Physio Treatments. Bookmark the permalink.